Asthma is a common lung disease in children and in adults, that causes obstruction of the air ways and characterized by episodes of breathlessness. It begins with a dry cough and a rapidly worsening tightness in the chest, causing laboured breathing and wheezing. It is an overreaction of the body’s own immune system usually caused by exposure to an allergen, a substance that the body perceives as foreign and dangerous. 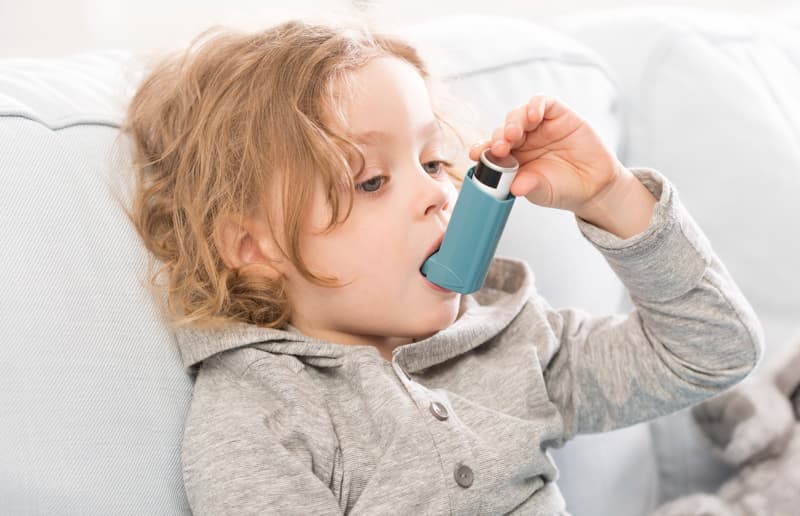 There is no cure for asthma, but it can be managed well with proper care and the right treatment. Asthma attacks are not always severe but can be life threatening if not treated. Asthma has been on the rise in the past few years and is one of the most common and costly diseases.

An asthma attack often occurs as a reaction to a substance in the environment, but irritants, foods, infection, stress, use of aspirin, ibuprofen, naproxen sodium, or other NSAIDS—or even rapid changes in weather and humidity can trigger an attack.

There are two forms of asthma: allergic and non-allergic, although the two often occur together. Common asthma provoking allergens include animal dander, cockroach allergens, pollens, molds, pet dander, chemicals, drugs, dust-mites, environmental pollutants, feathers, food additives (such as monosodium glutamate, sulfites such as sodium metabisulfite) seafood, dairy products, nuts, yeast-based foods, fumes, mold, and tobacco smoke. But any kind of allergen can precipitate an asthma attack. Food reactions can also be delayed hence the problem foods may not be apparent.

Factors that can trigger non-allergic asthma attacks include adrenal disorders, anxiety, temperature changes, exercise, extremes of dryness or humidity, fear, laughing, low blood sugar and stress. A respiratory infection such as bronchitis or a cold can also provoke the first attack and is also a trigger for asthma. Whatever the particular instigator, the bronchial tubes swell and become plugged with mucus. This inflammation further irritates the airways, resulting in even greater sensitivity. The attacks become more frequent and the inflammation more severe. A genetic link was discovered in 1999 by two Berkeley Researchers. In practice, usually a triad of eczema, allergies and asthma has been observed in patients.

During an asthma attack, spasms in the muscles surrounding the bronchi (small airways in the lungs) constrict, allowing too little air to pass out of the lungs. Asthma sufferers often describe this plight as “starving for air” or a feeling of suffocation. Typical symptoms of an asthma attack are coughing, wheezing, a feeling of tightness in the chest and difficulty breathing. An attack can last for a few minutes or several hours.

Cardiac asthma is a condition that causes the same symptoms as other types of asthma but is caused by heart failure.

Intrinsic asthma, a less common form of the disease, which generally appears during adulthood, is often associated with other respiratory diseases such as bronchitis or sinusitis and tends to appear during upper respiratory viral infections. People who suffer from intrinsic asthma are usually vulnerable to change the weather, exercise, emotional stress, and other factors related to inner feelings.

Asthma can be difficult to diagnose conclusively. Its symptoms may be resembling those of other diseases, such as emphysema, bronchitis and lower respiratory infections. To distinguish asthma from other conditions, a physician may recommend blood tests, chest x-rays and spirometry (a procedure that measures air breathed into and out of the lungs). If not treated properly, bronchial asthma can lead to pulmonary emphysema. However, with prompt diagnosis and appropriate treatment, serious danger from asthma should be preventable.

In general, recurrent attacks of breathlessness, cough and mucus, generalized wheezing and positive food and inhalant allergy tests along with a positive spirometry test confirm the diagnosis of asthma.

THE NATUROPATHIC APROACH FOR ASTHMA

The rate of asthma is rising rapidly, over the past decades especially in children. Some of the reasons often given to explain the rise in asthma include:


At your initial naturopathic consultation, Dr. Sushma Shah, ND will do a comprehensive assessment of your symptoms, health and wellness. She may suggest appropriate diagnostic allergy testing, along with any other laboratory testing if need be to rule out vitamin and mineral deficiencies in the body and the state of the adrenal glands which help the body deal with various stressors. Once the assessment is done, she will suggest a naturopathic treatment plan, incorporating the necessary dietary and lifestyle modifications with suggestions for vitamins or supplements for managing and treating asthma symptoms, improve optimal health and wellbeing.

If you are interested in treating or managing asthmatic symptoms in a natural way, or would like more information, please call the clinic at 416 913 4325 or email us at [email protected]